The alarm clock in the hotel room goes off and I get up immediately. The plan is to get to Hayden Valley before dawn to increase our chance of spotting animals. But when I look at my phone I'm shocked to find out it's only 3:18, and my watch confirms it! Turns out the alarm clock is totally crazy and goes about half minute faster by the minute! Damn, last night I noticed the time on the clock was way off but I thought it might have been unplugged so I just adjusted it without thinking too much about it. I wish I had paid more attention to it.

Although there's still more than two hours left for sleeping I'm now having trouble getting back to sleep. I'm not sure if I finally get any real sleep before my the alarm on my phone goes off and we get up and head out. It is super foggy outside. By the time we smell the Mud Volcano again the fog has got even thicker, and when we park our car at Hayden Vally we hardly got more than 30 meters of visibility. There's already another couple there. they are from Washington and have had better luck with wildlife viewing than us. They saw black bears yesterday from a pullout along the road to the north, which we'll be heading up today. They are hoping to see wolves today, too. But with this fog it doesn't seem likely anything will show up. 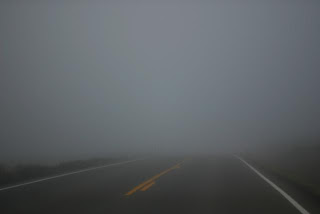 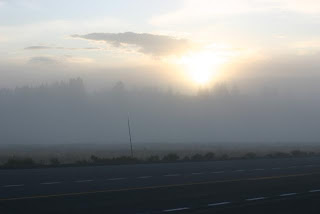 the sun's out but the fog remains

The sun finally rises but the fog remains. After another half hour we accept defeat and drive up north. We have to get to the Tower Falls campsite to grab a site before it's too late. The road winds uphill past the Canyon area. Not far beyond the trail head to Mt. Washburn, we see over 20 cars parked on the road side, people with big camera lens pointing them into the woods above the road. There's only one thing that can cause this. We quickly park and run back to where the crowd is. Up in the woods, some 50 meters away, is a grizzly bear! Now the park rules state you shall not get within 100 yards of a bear, but keeping that much distance is impossible at this stretch of the road. The bear doesn't seem to mind the crowd at all. It wanders in that area for 5-10 more minutes then walks further up and disappears into the woods. We have planned to hike the Mt Washburn trail today but with the grizzly just miles away we've changed our mind. The idea of just the two of us encountering a bear w/o anything like a bear spray is too exciting to actually carry out. 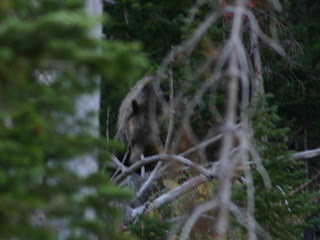 the bear!
The campsite at Tower Falls is primitive and small, with about 30 sites. We have no problem grabbing a site but some late comers are not so lucky. We set up camp, cook, eat, and head out to Larmar Valley. Now I've got high hopes for Larmar Valley. It's said to have the most wild life in the park. But we get disappointed again. There's nothing but more bisons. The sun is fierce and Juny is very much opposed to the idea of hiking in the sun. But there's absolutely no shades on the valley trails so we turn back and head up the road towards Mammoth. 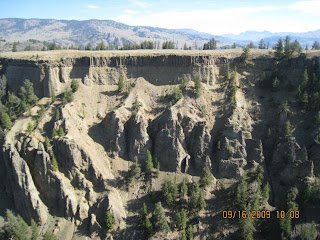 columnar basalt (top layer of the rocks) near tower falls 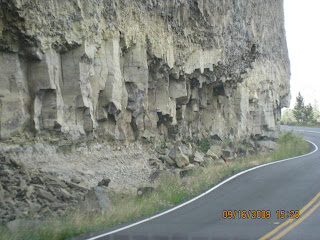 basalt by the road side. the column shape is quite visible.

We'll have the whole day tomorrow to explore Mammoth so we don't intend to go there today. But I'm interested in a dirt road along the way called Blacktail Plateau Drive. It goes deeper into the back country with little traffic. That means the chances of seeing wildlife should be good. Although the timing doesn't work in our favor: by this time we've learned that animals don't like coming out during the day in the sun. The road condition is poor and there's no reason to rush if you want to see animals. We drive slowly on the dirt road, and even with the little traffic it gets, we pull over to let faster cars pass for several times. Our patience finally pays off. Suddenly we spot a black creature trotting across the horizon. It's a lone black wolf! It keeps a leisure but bouncy pace across our field of view and finally disappears behind a ridge. wow, that is so cool! 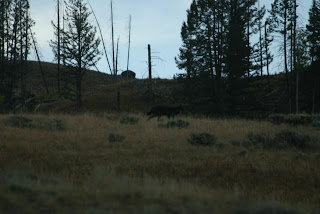 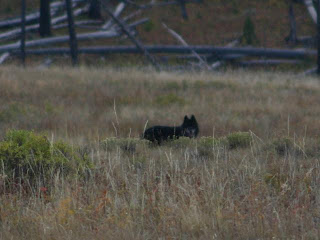 We don't get to see more wild animals on the dirt road. On our way back to camp we also checked out the petrified tree. It looks like a regular tree stump. I'm not very impressed. 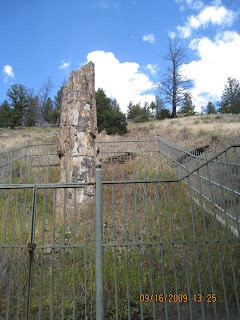 the petrified tree
It's now only 2:30 but we are so sleepy so we head back to camp and take a nap. By the time we head out again the cloud has gathered. We've noticed the same weather pattern almost every day we stay in Yellowstone: it's foggy in early morning, then clears up and gets quite hot by noon. The cloud appears in the afternoon and by 4pm there's enough shade to hike comfortably. Then near evening it'll start to rain.

So now is about the best time of the day to take a hike. We go to Lamar Valley again and start hiking down a trail at the head of the vallye. Less than a mile into the hike on a gentle slope I stop and scope the valley behind us. That's when a white dot catches my attention. I take out the spotting scope and find the white dot. It's a pronghorn antelope! It's about 500 meters out and that's too far for the camera. We start moving back toward the antelope, stopping from time to time to take a better look through the scope and take some pictures. Finally we are able to get close enough to take some great pictures. The antelope also notices us and would stop grazing and look up in our direction, then keep doing its own business. This is so exciting! A bear, a wolf, and an antelope all in one day! 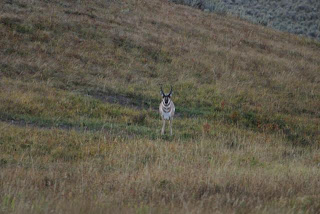 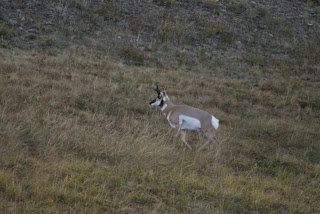 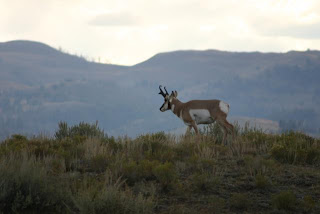 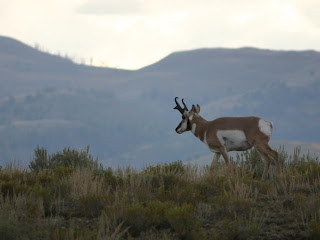 We drive on down and before long I spot another antelope 2-300 meters off the road. We finally pull over the road near the center of the valley. Many people are gathered around this spot looking for wolves. We don't see any wolves, but we see three more antelopes. This time all female, with one being a cub. We stick around as the hopes of seeing wolves fades. Then head back to camp and get some hot dogs (again) at the general store. It's been a long and fruitful day and we go to bed quite early.
Posted by hujn at 11:23 PM